Plugging in: when an adapter isn't just a widget. 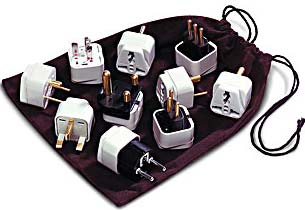 We did not begin our journey intending to get lost. Sometimes in life you get stranded in paradise, and it's (already) been one of those kinds of years.

Not that I did not sign up for it. My sweetie and I have been traveling in Central America looking for a good place to land for a while and working along the way. It's a plan I hatched a decade or so ago when I was working in a particularly dreadful cubicle. The walls were moldy. I dreamed of a job where I was able to work from anywhere with an internet connection.

The last 5 years have seen various permutations ranging from having work from home days (the gateway drug, in my opinion), to working out of my apartment, to it's current form of working and living abroad.

When we left Antigua (where we are living and working) to take our friend Onyx to the Rainbow Gathering in Palenque, Mexico, we thought we'd be away for 2 weeks. Instead what happened is the car broke down.

Well, actually, what REALLY happened was we fell in love with the camp ground, and THEN our car broke down. We were of course a little smug, calm, spiritual even. We took it as an unavoidable opportunity to take a chilaxitive in paradise: enjoy not having internet, the pool at the campground, the monkeys, the jungle, the ruins.

To give us credit, we did our due diligence to try to leave. I diagnosed the issue as being the ignition switch, and took it to a mechanic that a local friend of ours recommended. He confirmed the diagnosis, and told us we would not be able to get the part locally, and that we would need to call Mexico City or Villahermosa. I tried calling but my accent was not enough to stimulate the working impulse in the customer service representatives I was speaking with at the dealerships in those cities. I had the part number and took it around the village of Palenque, finally, in desperation, I took to the internet and got a part from a reputable GM Parts catalog in Massachusetts.

Boy, what a mistake that was. Mostly because it made us lazy. We shipped it the fastest way possible, and then we took to the swimming pool and we tried to find patterns and algorithms in the squelches of the howler monkeys (or at least I did). “The part is coming as fast as it can,” we said.

Not once, but twice the delivery of that part was mishandled. We got two sent to us, and neither arrived: ever.

None of this would really matter in a world of no obligations or expenses, but we were paying $5 USD for a small plate of guacamole at the campground restaurant without internet (they got it the day we left), and our resources were dwindling. I could write the book called Mexico on $50/day.

You see, being that we were camping, we had no stove, no bed. We had a palapa and a tent, and a campfire. For the first 2 weeks we cooked often. And then the rains came, and we found ourselves asphyxiating in the palapa from the smoke of wet wood. In addition, were a little limited as to the amount we could go in and out of town (and pay the collectivo, and the fees to enter the Archeological Park again, etc), and so the campground, while initially seeming cheap ($6/per person per night), was in reality a money hole that I would yell into sometimes to voice my frustrations.

There were several points during which all the spiritual calm and wisdom we exhibited at first combusted into fiery flames, and the last of those happened at a coffee shop in town. The waiter took pity on me, and he asked us if we had the part with us. I was avoiding taking it out myself, but had the part number and showed it to him. He smiled and said that no one cares about the part numbers here. He that if I went to the section of town where I found the initial technician, with the part, someone would have it.

So I did it. I didn't think it would work, but I was at my wits end. I took the damn part out, I got in a cab, and I went to the part of town that he mentioned. When the cab dropped us off, I looked about 100 meters down the street and saw the initial mechanic that I went to 4 weeks prior. The one who said I could not get the part here.

I was defiant, placed the part firmly on the filthy customer service counter like a winning royal flush, and waited.

And the 12 apostles, and especially John. “Do you have it?” I asked.

“Yes,” he said. He said it like it was nothing.

To me, coming from the land of milk and honey, good internet and databases, and Federal Express, this gentleman, especially in light of the Oddessy of the previous 5 weeks, seemed like nothing short of a back-handed miracle.

After thinking about it, however, it does make a certain kind of sense. In a country where there are still mom and pop stores staffed by family members who have run some if not all aspects of the business their entire lives, who needs databases?

It occurred to me that there are so many aspects of culture that I take for granted, and especially as an engineer. The 'adapters' that I am needing most in my travels, have rarely been widgets or even physical. They have to do with a whole system of culture that is invisible but pervasive none-the less, and which can make small obstacles insurmountable and expensive if not taken into account.

Long story short, the part went in and my car started right up. We are safely, happily and productively back in Antigua with some good lessons under our belt. We are also looking for some additional drupal projects to round out what we have currently going on here. If you know of any, give me a holler!

In truth, without deceit, certain, and most veritable.

It's father is the Sun; it's mother the moon.

The Wind carries it in its belly; its nurse is the Earth.

It is the origin of All, the consecration of the Universe.

Its inherent Strength is perfected, if it is turned into Earth.

Separate the Earth from Fire, the Subtle from the Gross, gently and with great Ingenuity.

It rises from Earth to heaven and descends again to Earth, thereby combining within Itself the powers of both the Above and the Below.

Thus will you obtain the Glory of the Whole Universe.  All Obscurity will be clear to you.  This is the greatest Force of all powers, because it overcomes every Subtle thing and penetrates every Solid thing.

In this way was the Universe created.  From this come many wondrous Applications, because this is the Pattern.

Therefore am I called Thrice Greatest Hermes, having all three parts of the wisdom of the Whole Universe.  Herein have I completely explained the Operation of the Sun.